The token issuance aims to reward edge nodes, operators, and collators. At each reward event, the NODL freshly minted Ik is distributed among participants as follows:

It’s worth looking at the reward per node in different growth scenarios to understand the sustainability of the model. For the network to be successful, it needs to provide geospatial availability where the demand is, which will widely evolve over the lifetime of the network. For example, for the asset tracking smart contract, most assets will come from the logistics supply chain, with a high density of smart devices to be tracked in urban areas, in hubs such as commercial harbors, or in controlled environments such as construction sites.

These sites will require a high density of nodes to capture the required data, while other areas will work with a best-effort network. Consumer use cases (such as geolocalized airdrops of NFTs) will not require geospatial incentivization at all. For that reason, in the first phase of the network, the purpose of the rewards will be to incentivize a broad coverage of urban zones, which growing demand will then naturally shape. With this model in mind, and taking into account a conservative range for a BLE antenna (30 m in urban dense areas, although in rural areas it can go up to 200 m), we want the network to be able to incentivize enough nodes to cover all urban areas on Earth at least once a day. The market will then shape this idealistic target, as all areas are not equal from the standpoint of the demand.

The number of daily active nodes is actually higher than the number of smartphones connected daily to the Nodle network, because statistically, the Nodle SDK will run as several distinct nodes on the same smartphones, in case the smartphone runs several apps embedding the SDK (for example, the Nodle Cash app and another partner app). We estimate the target is then in the vicinity of 300 million smartphones. As a reference, leading mobile advertising networks claim they can reach more than 2 billion smartphones daily.

At any given time, average rewards for edge nodes will depend on the size of the network. For reference, we can highlight three hypothetical scenarios for network growth leading to 300 millions daily active nodes, and project what it means in terms of reward for individual nodes:

In each scenario, the supply of NODL at each reward event remains fixed (on top of which the Nodle project has reserves to adjust rewards, and demand will also fund edge nodes). Based on the size of the network, the reward per node will vary. Whether these rewards match minimal edge nodes expectations (for example competing with monetization they expect from other mobile monetization options) will depend on the price of the token: 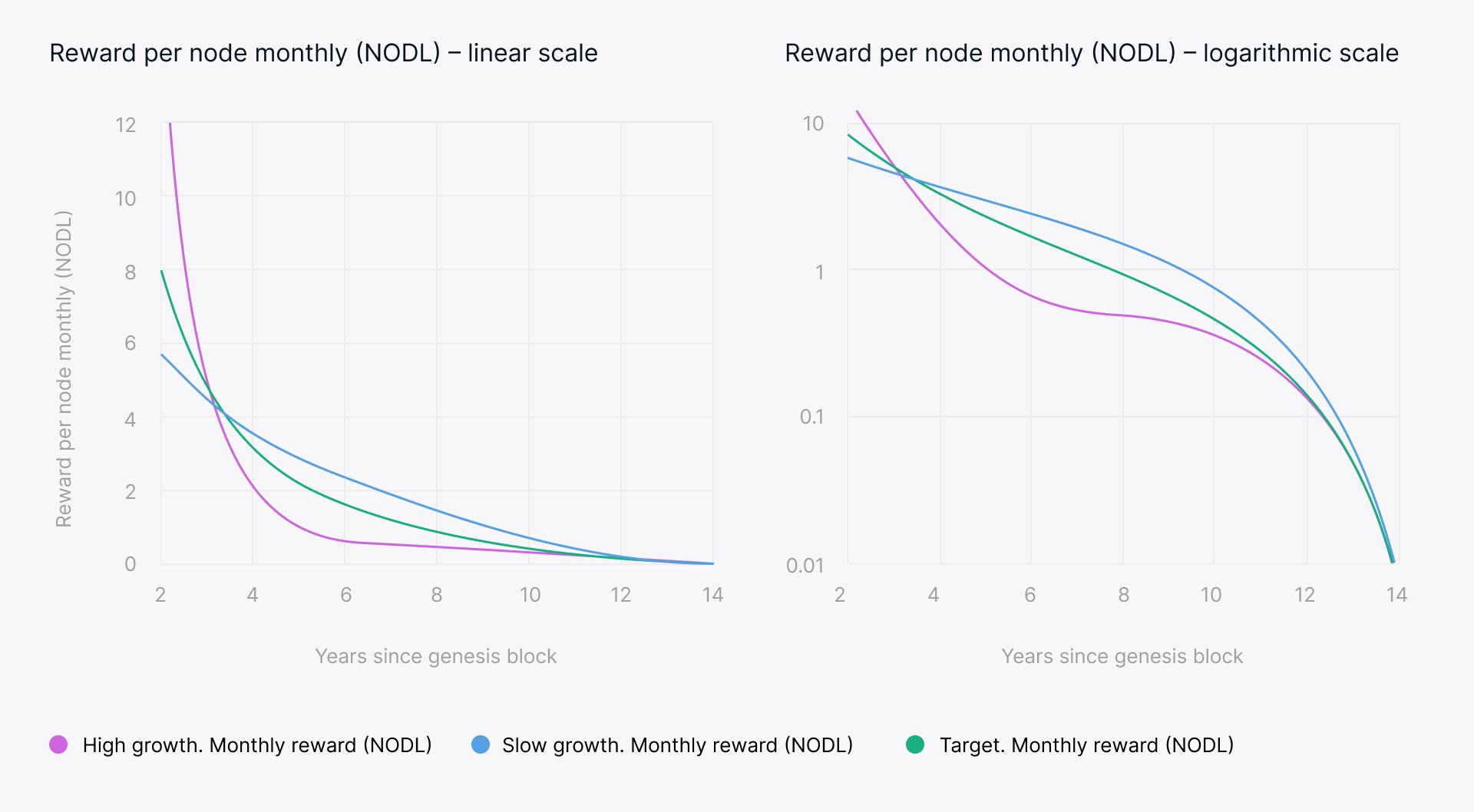 The rewards formula for edge nodes​

For edge nodes, the purpose of the rewards is to incentivize the nodes to:

We mark Hk​=80 the pool allocated to edge nodes at each reward event. The individual reward h(n) attributed to each node n will be computed as: h(n)=NHk​​.f(mnt​,mng​,mnc​) Where:

For a given reward event, each node will be rewarded proportionally to its uptime since the previous reward event. Between two reward events (which as of may 2022 is a 4-hours window), the window is divided into a number of 90-second slots. Each slot is allocated an equal share of the total reward available Hka. For any slot, a node is considered available (or up) if it performed at least one Nodle-related activity such as a Bluetooth scan, fetching a configuration, or uploading data. An oracle will then evaluate which nodes participated in the slot and distribute the rewards equitably between active nodes during that slot.

Compared to traditional telecommunication networks, the Nodle network is unique in the way it incentivizes moving nodes and provides ad-hoc and best-effort connectivity. The rewards formula is then designed to incentivize physical exploration and movement, on top of deterring farms of devices located in the same area.

For that purpose at each reward event, rewards will be equally distributed among hexagonal tiles with an average hexagon edge length of 66m, which corresponds to a resolution of level 10 in the h3 specification1. The reward will be distributed among nodes performing at least one Nodle-related activity between the two reward events. This has several implications: 1:https://h3geo.org

This naturally creates a map of warm and cold tiles, depending on network density. Nodes are incentivized to discover as many cold tiles as they can between two reward events.

For now, the capabilities multiplier is simply defined as 0 or 1. 1 is the baseline for nodes available to the network. 0, as of the time of writing in July 2022, is reserved for network users who can provide their own fleet of edge nodes but activate these nodes only to communicate with their own devices and do not share the connectivity with the Nodle network. This exactly nullifies the NODL rewards they are being issued, as they do not contribute to the network.

In the future, capabilities multipliers might include special capabilities such as onboarding HSM for smartphones. Nodle currently runs mainly on Android and iOS smartphones. Although they are not supported currently, a Linux implementation also exists, as well as portability on Android devices that are not smartphones. Research is currently being made for special miner nodes that could deploy – and be rewarded for – new capabilities on the network, such as establishing reputation for regular nodes, or onboarding Lorawan antennas.

It’s likely different regions of the world will see network deployment at different paces. As edge node operators and publishers (typically mobile apps) deploying the nodes will typically operate at a country level, there is a sizable risk for rewards to become biased towards a specific region. For example, if a super-app in a highly populated country deployed the SDK before the network reaches its maturity phase, it would reap most issuance rewards for the years to come, thus decreasing incentives to build coverage elsewhere. There is consequently an option, not activated at the moment, for the network to compartmentalize the rewards per country. Activating this option would require a consensus vetted by the community.

This compartmentalization is designed as a way to level opportunities across regions independently from the strength of the economy of a given country. Each country will be allocated a number of coins at each issuance event in proportion to their share of voice in the global population. This mechanism separates rewards by country, so that first joiners in any given region can be rewarded for their higher incremental utility than new nodes in already populated regions. For example, the US represents 4.25% of the global population. Hence at any given reward event, nodes in the US will reap 4.25% of rewards. Unattributed rewards will be shared among participants in other countries.